My latest book was The Naked Sun. Next up are A World Undone: The Story of the Great War, Anna Karenina, and The Robots of Dawn.

The Naked Sun is the second novel in Isaac Asimov's robot series. I didn't like it quite as much as the first book, Caves of Steel, but it was still an enjoyable read.  Like Caves of Steel, The Naked Sun is a whodunit about a human detective from Earth forced to work with a robot as a partner.  Like Asimov's earlier short stories, it focuses heavily on on his so-called laws of robotics.  Overall, it was an enjoyable story that I'd recommend to anyone who likes mysteries or science fiction and can at least tolerate the other genre. 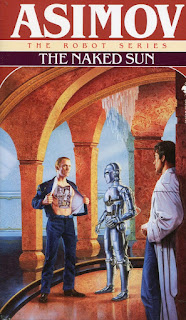 Aside from the similarities discussed above, this story is quite different from the first novel.  In the first book,  the population getting up to eight billion meant that the vast majority of the Earth's surface has to be used to grow yeast for sustenance, forcing everyone to move to completely enclosed, incredibly dense cities.  As much as the novel focused on the mystery, it explored the social dynamics and other implications of such dense living.  In this book, the detective goes to one of the fifty colonized worlds.  On the planet Solaria, there are 20,000 people and 200,000,000 robots.  Asimov uses this locale to explore how a society might look if it a combination of an incredibly sparse population and technology made it so that people literally never had to be in one another's presence, except for procreation.

I did find the protagonist somewhat off putting.   He seemed prone to erratic behavior that didn't make much sense,  His robot partner was also sidelined most of the time, and I missed their interactions.  I also think that the clues he tries to give lead up to a motive that's fairly preposterous.  Other than these minor critiques, I found it to be quite a good book.
Posted by Matthew at 9:02:00 PM