My latest book was Unbroken: A World War II Story of Survival, Resilience, and Redemption.  Next up are The Sun Also Rises, The Naked Sun, and A World Undone: The Story of the Great War, 1914 to 1918.

I enjoyed this book, but it was also fairly depressing and very sad at times.  Unbroken tells the story of  Louis Zamperini, an Olympic athlete who finds himself a prisoner of the Japanese during World War Two.  This reminded me of Endurance, the story of Ernest Shackleton, who, with his crew, was trapped on a sheet of ice adrift in Antarctic seas.  Both books show people enduring things beyond what seems possible as they face ever-increasing obstacles, even when it seems like things can't get any worse. 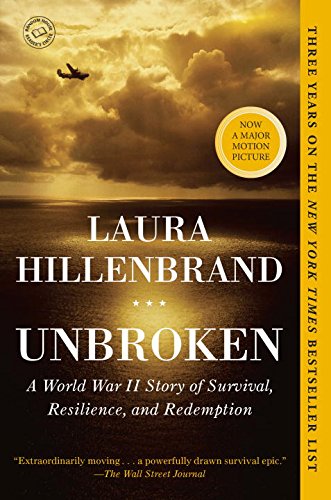 The main difference is that no person created the difficulties faced by Shackleton.  He made a risky voyage, and nature did the rest.  While Zamperini certainly faced some issues dealing with nature, the vast majority of his suffering was inflicted by people.  Given the emphasis placed on the horrific acts of the Nazis, it can be easy to forget that they were by no means alone in committing atrocities during WWII.

So, instead of just feeling bad for those suffering, I also felt a fair amount of rage at those causing them pain.  During the war, members of the Allied Forces who were prisoners of Japan were starved, tortured, murdered, and even eaten by their captors.  That doesn't even touch on the mass murder and sexual slavery of civilians.  Most of that is beyond the scope of the book.  While it tangentially provides information on the war more broadly, it is focused on the personal hell that Zamperini found himself in as a POW.

The resilience he showed is astounding, but I don't know that I would agree with the title.  My mom recommended this book to me, and I'd have to agree with her that calling him "Unbroken" isn't entirely accurate.  While he showed a capacity to endure that seems beyond human while at the camp, it wasn't entirely smooth sailing when he returned home.  Like so many POWs, he never had any kind of treatment for the deep psychological scars he carried and sought too lose himself in alcohol.  He eventually made peace with his issues, but there are so many veterans who haven't.

This book is, at times, sad, infuriating, funny, uplifting, and difficult to stomach.  It was a good read, and I'd highly recommend it.