I recently asked people for recommendations for science fiction and fantasy books and got a tremendous response.  Even excluding books that are part of incomplete series, I received recommendations of 74 books comprising 39,785 pages, so I have my work cut out for me.  I started with the Southern Reach trilogy, which is probably better known by the name of its first book, Annihilation, since that's what they named the Natalie Portman movie based on the series.  Ordinarily I would read one book from a series like this and then rotate through my other lists before reading the next.  In this case, I finished the first book in two days because I couldn't put it down and immediately started the next. 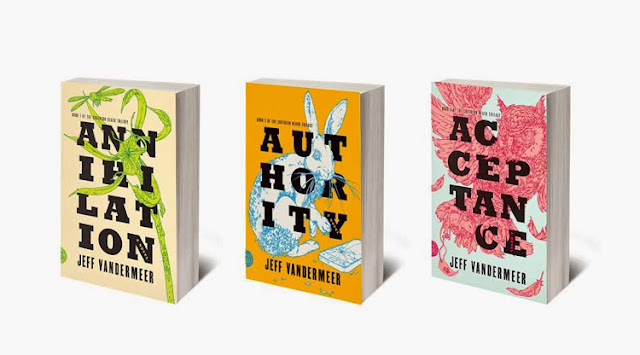 If I had read only the first book, I would have trouble classifying this as science fiction or fantasy.  While it leans heavily toward the latter, there are so many bizarre things in the story that I would have trouble thinking of an explanation that didn't include magic or creatures of myth.  While there are some overtones that made me think of Twilight Zone or the X-Files, at its core the story seemed to me to come much closer to the works of H. P. Lovecraft.  That would seem to make it part of the horror genre.  I never thought of it as such while I was reading it, but I'm not sure why not.  It certainly fits there, and it's not as though having science fiction or fantasy elements remove Frankenstein or Dracula from that genre.

I really liked most of the characters in these books.  What's especially odd about that is that there are deliberate steps taken to make the characters impersonal.  For instance, names are rarely used.  Add that to the fact that they are confronted with things that I'm pretty sure no reader has ever dealt with, and they should seem almost alien to us.  Despite all of that, I found them relatable and I cared about what happened to them.  Additionally, the book is incredibly easy to read, while still being intelligent.

I like for stories to be nearly tied up at the end, with everything made clear, even if you have to read through multiple times to catch everything.  I haven't yet tried to do another read through, but I'm firmly convinced that this is not that kind of story.  The fact that you might still be very much in the dark about the both the past and the future might be something else that makes it appropriate to label this as horror.  Then again, maybe it was made super clear and I missed it and people will comment to tell me that I'm a moron.  In my defense, I did finish the last book at like two in the morning because I just couldn't stop.

I loved this series and I will probably read it again, which is something I pretty much never do.  If you're at all okay with stories that include creepy and bizarre (and occasionally macabre) events, I would highly recommend it.
Posted by Matthew at 5:24:00 PM