I finally finished Don Quixote today. Next up are Dune Messiah, The Bully Pulpit, and Invisible Man.

The full original title was El ingenioso hidalgo don Quijote de la Mancha which translates to The Ingenious Gentleman Don Quixote of La Mancha. It was published the early 17th century and is considered one of the earliest novels ever written and a foundational work of modern Western literature. It’s also often ranked as one of the greatest books ever written. I went with the Rutherford translation (mainly based on this writeup). 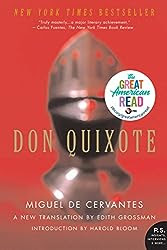 Don Quixote was very difficult to get through. I don’t mean this in terms of being hard to read; Rutherford’s translation is actually very easy to read. It was difficult to get through because it is incredibly boring. In each of the fiction books I’ve read so far, no matter how I felt about them generally, I had some interest in what was going to happen. Not so here. At no point in the novel did I develop any interest in how the delusional ass and his apathetic hobbit-like companion would next try to ruin some unobjectionable stranger’s day (or month (or life)) or the, more likely than not, thrashing they’d receive in the process. I wasn’t alone in this feeling. My mother was reading it at the same time as me, and I made a comment that I hoped to make some headway on flights when I had nothing else to do. She responded, only half-jokingly I think, “Is reading it really better than doing nothing?” There are two main parts of what we today view as Don Quixote, the second of which was actually the sequel. When I texted my mother that I was thinking about breaking it up by reading another book in between, her reply was “I am sticking with spending my required 30 minutes on it or I will never finish it, but I bought a novel to read today to remind me that not all reading is a chore.”

You can look at my Catch-22 post for my thoughts on why great book aren’t always good reads. That’s even more applicable here. If you write the first novel, it will always be an important part of the study of literature, even if it’s bad. I imagine that I would have enjoyed the book more if I had the context of the times. The main point of the story was to make fun of stories of chivalry that the author felt were held in too high regard. It’s obvious that a satire loses something when the reader has no knowledge of the target material. An analogue might be a novel about a man who read the trash fiction available today in such tremendous quantities that he became convinced that sparkly vampires are real and went out to become one and then have the adventures that he believes accompany such an existence. This might be tremendously funny to those of us who have put up with those novels, but bereft of context it would just come across as even more ridiculous than the material it seeks to mock.

I struggle to think of anything positive about the book. There are some moments in the book that are funny, but, at least for me, they came at times when I was so exhausted by the book’s repetition and monotony that they simply did nothing for me. Even in books I don’t like, I can understand how some people like them, but I don’t think that will be the case here. As important as the work is, it has very little that I can find to offer a good reading experience.
Posted by Matthew at 2:02:00 PM