My latest book was  Chapterhouse: Dune by Frank Herbert, Next up are Gotham: A History of New York City to 1898, The Sound and the Fury, and Robot Dreams.

This was the sixth and final Dune novel by the author of the original story.  While I found this better than some of the earlier books, it was not good enough to redeem a series which, after the first entry, quickly became inaccessible and monotonous.  Once again, I was left observing characters talking incessantly about how important it is that they keep their plans secret without finding out what the plans actually are until the very last moment.  I couldn't help the feeling that the author himself didn't know until that point either. 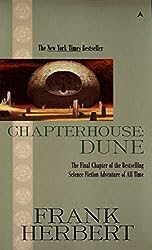 Chapterhouse: Dune was published in 1985, twenty years after Dune, the book that started it all.  In the story's chronology, over 5,000 years had passed.  This was the last Dune book by Frank Herbert, author of the original story.  His son would later co-author ten additional books that take place before, during, and after the original six.  Like each of the prior books, Chapterhouse was a commercial success and generally received positive critical reviews.  I personally can't see why.  My thoughts here haven't really changed from when I wrote critically about the third book, Children of Dune.  The following three books suffered from all of the same problems that it did.

The original book, Dune, was excellent.  Science fiction books often fail to engage readers because the universe presented to us is so foreign that it's difficult to connect with the people in it.  Dune, like most good science-fiction and fantasy books I've read, frequently returned to one central protagonist. That protagonist served as an access point because I got to know his thoughts and motivations. This allowed me to identify with him, and experience the universe through his eyes. In the five books that followed, however, while they reveal certain thoughts of numerous characters, nobody is truly open to the reader. It's only in the last 5-10% of the book that you actually get to know who's on what side and what their goals were. The revelation didn't really interest me because I didn't care about any of the characters that were impacted. This might be something that would be remedied in repeated reading because I'd know the motivations, but I doubt that would help in this case as I mainly found the central character's ultimate goal bizarre and off putting.

I understand that many people enjoyed Dune books that aren't Dune, but I personally can't recommend them.  I've also had people recommend the prequels written by his son.  I might try those some day, but right now I'm just burnt out on Dune.  Now I'm going to try to read all of Asimov's Robots and Foundation books, which I imagine will leave me burnt out on sci-fi generally for a while.
Posted by Matthew at 1:11:00 PM