Yesterday I finished Children of Dune. Next up are Contre Saint-Beuve, the Count of Monte Cristo, and God Emporer of Dune.

I was disappointed with this book. I have to agree with friends who told me that the sequels aren't as good as the first book. I greatly enjoyed Dune. I reserved judgement on Dune Messiah because it seemed to mainly be a lead up to Children of Dune. 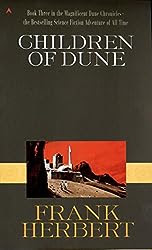 The first book worked for me, I think, mainly because in the midst of weird names, intricate conspiracies, and several story lines, it frequently returned to one central protagonist. That protagonist served as an anchor because I got to know his thoughts and motivations. This allowed me to relate, like, empathize, and root for him. In the next two books, however, while they reveal certain thoughts of numerous characters, nobody is truly open to the reader. It's only in the last 5-10% of the book that you actually get to know who's on what side and what their goals were. The revelation didn't really interest me because I didn't care about any of the characters that were impacted. This might be something that would be remedied in repeated reading because I'd know the motivations, but I doubt that would help in this case as I mainly found the central character's ultimate goal bizarre and off putting.

Wikipedia tells me that Children of Dune was the first ever hardcover best selling science-fiction novel. I have to believe that came more from anticipation due to the prior novels than from the quality of the book itself. I will still be reading the three remaining Dune novels written by Frank Herbert, but my expectations are greatly diminished.
Posted by Matthew at 2:16:00 PM