My latest book was  Endurance: Shackleton's Incredible Voyage by Alfred Lansing.  Next up are The Recognitions, Chapterhouse: Dune, and The Education of Henry Adams.

I really had trouble putting this book down, finishing it in only four days.  Endurance, named for Shackleton's ship, tells the true story of an expedition that intended to be the first to ever traverse Antarctica only to go horribly awry.   The account amounts to the most powerful look into mankind's ability to cope, adapt, survive and endure that I've ever had.  Of the 28 men on that ship, only 6 were supposed to disembark in Antarctica to make the journey.  But when the ice unexpectedly trapped and eventually crushed their ship, all of them were trapped on an ice floe without a real plan to get to land or hope of being rescued. 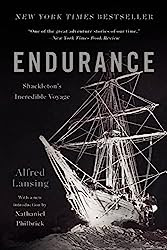 Ernest Shackleton was a consummate adventurer.  In 1909, he was only 112 miles away from being the first person to ever reach the South Pole.  This was ultimately accomplished in 1911 by an expedition from Norway.  With his chance to be the first to reach the South Pole gone, he set his sights on being the first to traverse the continent and spent the next two years planning, preparing, recruiting, and acquiring funding.

Shackleton's plan was to land the main party of six on one side of the continent while another team would land on the opposite side and setup a series of food caches for the last quarter of the journey, since they would be unable to carry sufficient supplies to cover the entire journey.  On August 4, 1914, the very day George V presented Shackleton with the Union Jack to fly on the expedition,  Britain declared war on Germany.  Even though it might have caused years of work to be for nothing, Shackleton sent a message to the Admiralty putting his ships at their disposal.  To his great relief, they send one word in response: "proceed".

So began an incredible journey that tested the very limits of human perseverance.  It would be over two years before anyone in the crew would see real civilization again.  I've been camping in below freezing temperatures.  As uncomfortable as I was, I had a camp fire to warm me, dry clothes to change wear, and the knowledge that I'd be in a warm house before long.  The crew of Endurance had none of these things.  They lived for months on end on a block of solid ice; always cold, always wet, and no way to know if they'd ever really feel warm again.

If this were a work of fiction, I'd accuse the author of being the author of going well beyond what's believable in throwing up new obstacles in front of the characters at every turn.  I would view the characters' equanimity as patently absurd.  But this is a true story about real people.  I'm not saying they were perfect, and some of them were less pleasant or hard working than others, but on the whole they got up each day, did whatever work they needed to do, and didn't bother to complain.  It seems like the hardest times were actually those where there was nothing to do.  It was certainly miserable to stay awake for days on end struggling in a boat against a storm, but at least they had some control over their lives.  It could be far more difficult to sit around day after day, month after month, unable to do anything to help your situation; to feel that powerless.

I really enjoyed this book.  It really gripped me and made me feel like I was there struggling with them.  I wanted cheer at their triumphs and cry when they failed.  I would definitely recommend it.
Posted by Matthew at 1:28:00 PM