My latest book was Beloved by Toni Morrison.  Next up are Heretics of Dune, Endurance: Shackleton's Incredible Voyage, and The Recognitions.

To be honest, before reading this book, I only had a general conception of Toni Morrison as an author concerned with feminism and racial justice, so I certainly expected those to be themes.  What I wasn't expecting was for this to essentially be a Stephen King novel wrapped in those themes.  In my first half hour of reading, I encountered ghosts, infanticide, bestiality, rape, and descriptions of sex that I found fairly creepy.  Each of these elements recur throughout the novel. 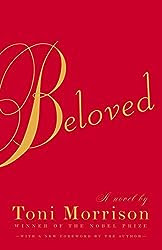 While many didn't feel that Beloved received the acclaim it deserved when it was published in 1987, it did win a Pulitzer Prize.  Beyond that, a New York Times survey of writers and  critics ranked it the best work of American fiction published between 1981 to 2006.  The novel was inspired by the true life story of a slave, Margaret Garner, who escaped slavery in 1856 by fleeing from Kentucky to Ohio, a free state.

Based on a true story or not, I found the juxtaposition of the supernatural against the horrors of slavery to be jarring.  There are obviously numerous examples in literature and film of using science fiction and fantasy settings as lenses through which the author comments on race and gender issues.  That's normal to me.  It seems like another matter altogether to use the barbarity surrounding slavery as a backdrop to tell a ghost story.  It would seem similarly odd to me to set a possession story amongst holocaust victims.  This isn't to imply that the author was disrespectful.  I imagine her intent was to tell a story about a former slave who had something horrifying happen to her and the story she wanted to tell included the supernatural.  But I still found the combination to be uncomfortable.

That being said, I generally found it to be a good book.  The book is intentionally difficult to read at times, both because of the disturbing content and the psychosis of various characters through whom we're seeing the world.  It's also fairly depressing.  But the characters are interesting and the story intriguing.  The narrative jumps around, but it reveals the characters' backgrounds in a compelling way.

Overall, it's a book I'd recommend, but you have to be ready to for depressing and disturbing content.
Posted by Matthew at 8:58:00 PM