I finished God Emperor of Dune yesterday.  Next up are 1776, Beloved, and Heretics of Dune.

God Emperor of Dune if the fourth of the six Dune books written by Frank Herbert. I won't call it a disappointment, but only because my expectations have steadily lowered along with my enjoyment of each book. 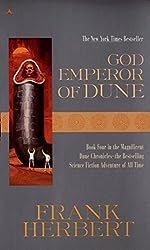 As discussed in my review of the last book, I feel that science fiction and fantasy books can only really engage most readers when there's a character that we can identify with.  Oftentimes this is also a person just learning about the story setting so we can learn along with them, but that's not necessary.  What is needed is someone that we can, if not empathize with,  at least root for.  Unfortunately, the author again tells the story in such a manner that we only understand the goals of the characters at the very end of the story, to the extent we get to know them at all.

The only character that we see enough to properly view as a protagonist is so enigmatic that it's hard to think of him as a character.  This is intentional.  One of the key concepts the author seeks to explore is the nature of a person raising himself up to the level of a deity.  This could be an interesting philosophical discussion, but the nature of his ascendancy is so absurd as to render it useless for that purpose.  Instead it just leaves us with a story that fails to engage.

The tone of the book left me feeling like by the time he got to this book the author himself was getting tired of the world he had created.  I certainly am.  I will finish the last two books in the series, but it feels more like a chore with each book.  Definitely a let down after the first book.  I do still recommend the first book.  It's great as a stand alone story.
Posted by Matthew at 2:23:00 PM